Last week I was asked by Steve if a 30-hertz cycle will be 36-foot long if employing the quarter wavelength formula. Well yes. I mean if we want to find out the length of any frequency then we divide that frequency into 1,130/1,132, whatever constant speed of sound you want to use. It’s about 34 feet in that example so yes he’s correct. That’s a great way to try to look at low-frequency and just use common sense. You don’t need an acoustic engineering background, just use some common sense. We have updated this blog to reflect current changes in technology and science 11/20/19.

So Steve just showed us through his example that the wave is 34-foot long. Thirty-four feet, you know how big that is? I think it’s probably half as long as your house. It’s a sizable dimension, it’s three car lengths. It’s a big, long-wave with lots of energy and it’s going places. It ain’t letting much stop it.

When it comes out of your speaker, whether a subwoofer or a regular speaker, it’s moving. It’s long and powerful and it goes through your room and any place in the room it doesn’t fit it starts moving the air around and the room if the room is not built right. So it moves the air in places in the room it doesn’t like and it moves the structure too. So you’ve got both of these things going on because of this invisible energy traveling through the room. 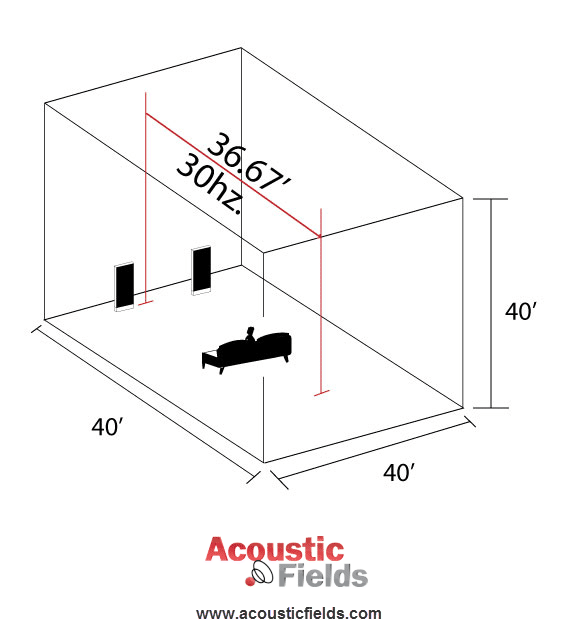 The half-wavelength theory says “if your room is 30-feet long, it goes 30 feet and then it comes back four”. Forget about the part that goes through the wall. So it fits. A 20-cycle wave that’s 57 or 58-foot long and your room is 30, it goes down 30, comes back 30, so it fits. This is the reason behind the statement you see in the literature.

If you want a room that’s completely flat down to 20 cycles it’s got to be 30-foot in any one direction. Got to be 30-foot more than one direction but the literature tells us one direction. So what is the quarter wavelength formula? Quarter wavelength formula says “How much of that energy comes back into the room? What’s the distance of that energy back into the room after it hits the room boundary surface?” and if it’s twenty-five percent, one-quarter of the length. 34/6 What is that? Fifty-one or five feet let’s say. So nine feet would be a quarter wavelength of 36. So what happens then with that nine? Okay, that’s the 25 percent then there are all kinds of theories about what that means and we should probably do a video on the current thinking on that and how it relates.

Now then you’ve got to take that and drop it into your room. When you drop it into the room, that 25 percent has new meaning depending on where it is in the room and we should probably do a video on that meaning.

It’s the Classic ‘Bull in a China Shop’ Analogy.

It is the classic ‘bull in a china shop’ analogy especially when it comes to low-frequencies because if you’re going to absorb low-frequency energy, let’s go use our 25 percent example and the wavelength is 34-foot long, let’s call it 36. So you’ve got 9 feet, 25 percent. Current literature tells you that if you’re going to absorb most of that 36-foot long wave, that you’ve got to have an absorber that’s a 9-foot deep cause that’s 25 percent.

How many places do you know have studios that have 9-foot deep, 30-cycle absorbers? Well, there’s a lot of them out there. There’s a lot of them that have been built with that design. When I saw that and I saw the space requirements I said “well let’s find another technology that we can use that does it better” and that’s where our activated carbon diaphragmatic absorbers came in.

Then after we got studying diaphragmatic we realize, “well let’s make this even better in the same space or if we can let’s make better in a little bit smaller space” and we were able to do both. And that’s how the carbon and the diaphragmatic technology came into being.

We didn’t create diaphragmatic absorption. It’s just the process that we found to be most effective in terms of horsepower for space requirements. The performance versus the space requirement ratios was really good. Now that said we saw three different ways to make it better. The cabinet, the dual front wall and definitely the carbon. So we took old technology and made it much better. What’s that company? BASF? “We don’t make things, we make things better”

In a manner we have. We achieved the same frequency and we achieved absorption. But we don’t get probably a hundred percent in the 30-cycle range that you might get with a 9-foot absorber because that distance is your best friend when it comes to really low stuff. But that said we did manage to squeeze 63 percent of 40-cycles and a hundred percent of 50-cycles.

I believe there’s another 30 or 40 percent of absorption at 30 cycles in the technology. The 30 to 35 absorption that we got that the Riverbank labs engineers told us we had but that they couldn’t certify but they said there was plenty of data below 40 cycles. I believe there’s another 30 to 40 percent in there at 30 cycles but it’s research and development and testing again.

I believe the technology we have has a few more levels that we can go with it to really get an absorber that does go down into the ’30s, low 30’s. Can we get one that goes into the ’20s? That would be a great task, I probably could but I would need more depths to work with, but I think so. It would just take some testing. Is it needed? No. is there a market for it? Probably not, but it would just be a cool scientific thing to do. A good obsessional hobby for my retirement years.

If you want to learn more about this subject please sign up for our free room acoustic treatment videos and ebook which provide step by step instructions on all major room acoustic issues. Get instant access by signing up now. If you would like your room acoustic issues analysed for free by me then please fill in the form here and I will be happy to take a look for you.

Close Menu
Call us for a free consultation +1 520–392–9486
To make this site work properly, we sometimes place small data files called cookies on your device. Most big websites do this too. A cookie is a small text file that a website saves on your computer or mobile device when you visit the site. It enables the website to remember your actions and preferences (such as login, language, font size and other display preferences) over a period of time, so you don’t have to keep re-entering them whenever you come back to the site or browse from one page to another. Please read our Privacy Policy to learn more about cookies and how they work.OkRead our Privacy Policy