We have the good fortune of working with very high end clients. These clients have the funds to see a project through from the design to completion without too much concern over costs. Even though money is no object, price is always a concern, but a few thousand here and there is not that big of a deal if the end result justifies the expense.

One of our clients, who we built a small project studio for, was tired of the traffic noise from the street they lived on. It was not that busy of a street but the client wanted to reduce the street noise in his outside yard area to as low as levels as possible. The outside patio and pool area were the primary social settings and less noise and more privacy were the objectives. Barrier technology needs to be employed.

Sound transmission loss or STC rating is the number assigned to the structure we need to design and build for a building. This STC measurement really does not apply but we can use it as an example to illustrate what we are trying to achieve. Our measurements indicated that we needed to build a barrier that would have a STC rating of at least 65 to put the breaks on our 40 cycle sometimes energy from the garbage trucks and motorcycles. If we are trying to stop 100 SPL from the source, a barrier with a rating of 65 will reduce that pressure level down into the 30 – 40 dB range. This is acceptable for noises that appear infrequently. It is also very acceptable for noise levels that are consistent and steady.

STC would be a good number if we are constructing a building, but this is an outside barrier configuration. For this measurement we need to use an OITC number. This is a number that measures the sound transmission between outdoor and indoor structures. OITC uses a noise source spectrum that takes into consideration frequencies below 80 Hz.

Our goal for the structure was to be able to handle the full frequency range of sounds faced from the traffic on the street. Since it was a residential area, truck traffic was minimal but the garbage trucks in the area produced the lowest frequencies. You know the ones that set off all the car alarms as they go down the street. We had low measured frequencies in the forty cycle range and at 100 SPL at certain times of the day. If we could build a barrier for this frequency range, we were not that concerned about middle and high frequencies.

Obviously, we had to conform to existing city codes. Our goal was to build the barrier as high as possible. After checking with the city, we realized that building our fence/barrier could be no more than 8′ high. Height is critical with outside barriers to reflect as much sound back to its source as possible and out of our living area, but big brother would only permit us up to 8′.

Our design consisted of starting with a poured concrete barrier of 8″ thickness. Poured concrete is expensive, but it is the best barrier material we could use. We used the Fox Bloc molds for our initial design. With these molds, one can leave the mold on after the pour and wall is dry or you can remove the 2″ thick mold sides and attach anything else to the wall itself depending on your acoustical requirements.

We were fortunate that the client had a large supply of what we call river rock in Arizona. River rock is a solid rock material with average rock size of between 6″ – 8″ and 2″- 3″ deep. They are dense rocks that have have had their edges smoothed out from having water running over them for probably millions of years. The average size river rock weighs between 5 and 8 pounds. 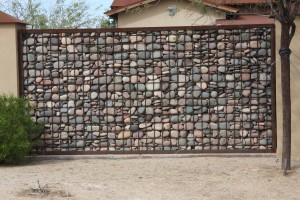 After our initial concrete poured barrier wall was in place, we began the process of attaching the river rock to the wall. We tried numerous adhesives, but we wanted one that would be able to handle the hot summer days in the desert and the colder winter nights of the Sonora Desert. Temperature extreme ranges can go from a low of 20 degrees in the winter to a high of 120 degrees in the summer. This is a 100 degree temperature swing range that must be accounted for. We do not want 8 pound rocks falling on anything or anyone. We chose to “wrap” the structure with steel rebarb that would rust naturally and lend its appearance to the natural rock structure. 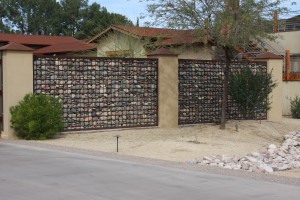 Since it was an outside structure and in view of everyone, we had to make sure the river rocks were placed together in a pattern that lent itself to complimenting our 8″ thick poured concrete wall. This was the time consuming part of the project and accounted for most of the project’s cost. We wanted each rock to inlay with the the one next to it, so there was no gaps showing that would show the solid concrete wall structure behind.

After the project was finished, I stepped back and looked at the structure. I could not help but think how great this build would be for a recording studio. Not only could the studio benefit from the barrier technology and its high STC rating, but I think it would be a unique design for the inside of a live room. The river rock and solid concrete wall would provide the necessary sound attenuation from both inside and outside sources but the river rock would provide a natural diffusion for middle and high frequencies. We would need to compliment the other live room surfaces with sound absorbing materials to keep the sonic balance of the room.